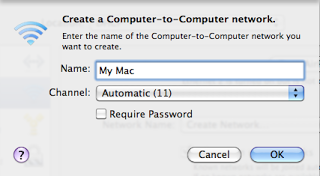 I was in a taxi out in Qatar recently working with two colleagues on an event to launch the new Cuban Hospital in Qatar. One of the chaps had just finished a short video edit but was off to another meeting with the client. The other needed the finished proof of the edit on his laptop for a meeting but we didn’t have a USB stick or CD between us and only 5 minutes before it need to be on his machine.  I said “No problem, I can sort that!” Luckily they were both using Mac laptops, so on one of them I created a computer-to-computer wireless network (in System Preferences/Network), and turned on file sharing. With the other laptop I found my newly setup network from the first Mac, selected it and – using the public folder on the first Mac (no need to ask anyone for passwords) – copied the file across.  Voilà!